Environmentalist Apocalypse
LOGIN
Monday, December 5, 2022
Top Posts
What’s Up With the Nazi “Black Sun” Rune Wheel?
Elizabeth Clare Prophet Claimed To Be ‘Clairvoyant’
The Eightfold Path of Denial of Death
Why I Left The Radical Secular Podcast
Miss R*EVOLutionaries: Panel Discussion
Money Is Not A “Shared Fiction”
Beliefs About God Won’t Make You Moral
This Is Not Fine!
Wealth Concentration Leads to Feudalism
Is Something Unclear About What’s Wrong With America?
SUBSCRIBE
Archive 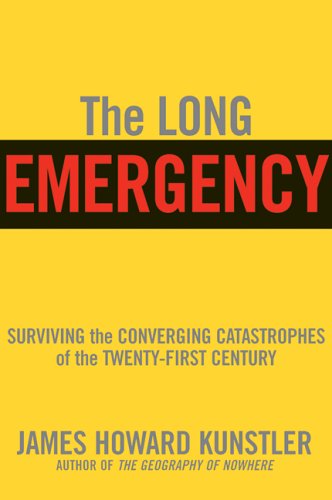 Letter to Salon/Amazon book review in response to the following interview:

After the oil is gone: Say goodbye to your suburban house, yoke up that horse, and stand by to repel pirates! Author James Howard Kunstler talks about the dire world of his new book, “The Long Emergency.”

Environmentalists will love this book–it just proves their central point: Mankind’s continuing hubris will lead to its destruction.

If you’ve read this, you know what fire and brimstone sounds like, when it’s coming from a radical critic of modernity. The most annoying part is that Kunstler seems to take pleasure in the almost biblical recompense for our “profligate” ways. In the end, Kunstler’s energy would be better spent looking for real solutions, rather than taking glee in the demise of his hated “sprawl.”

Kunstler’s scenario for the additional 3 billion people who will be born in the next 40 years (as well as many of those already here), is mass extinction–euphemistically called “die-back”. Who can take this seriously? For someone who seems to abhor war, he nonetheless accepts the possibility of a genocide that would make all the wars of the twentieth century pale in comparison. If he is even partially correct, the future of the planet depends on us literally inventing ourselves out of this dilemma.

Are we running out of oil? Of course. Should we take steps to conserve and switch to other fuels? Absolutely. If anything positive can come out of the current “peak oil” furor, it will be the desire to act to stave off these eventualities.

But should our society collectively be banished to the stone age, to atone for some imagined crimes of modern progress that Kunstler despises? No, and we won’t be. It’s funny how the current generation of doom prophets seem to enjoy the prospect of a diminished world–more concerned about their own rectitude than about our children living a future of peace and continued prosperity. Reading between the lines, Kunstler would like someone to give the world a good spanking, and he’d like to watch. (His blog is titled Clusterf**k Nation Chronicle.)

The solution will be achieved, (possibly lurching and gasping), through the same self-corrective mechanism of the markets that have worked so far. Long before ordinary gasoline costs $5.00 a gallon, the laws of the market say other energy products will become economically viable. Money will follow human needs, incentives will be HUGE to keep the flow going. Solar energy alone amounts to approximately 700 quadrillion (7 x 10 E17) kilowatt-hours reaching the surface of the earth each year. A miniscule fraction of this would meet all the world’s energy demands.

Humans are too smart to give up what we’ve earned. We are getting smarter, and living longer. Both trends will continue. Having once experienced the many benefits of the modern world, what makes Kunstler think anyone will be satisfied in returning to a world of disease, reduced life-expectancy, poverty, and starvation? I’m placing my bets on science. Life will get more comfortable, not less. For a real glimpse of the likely future, read Ray Kurzweil–or ask the Chinese, who have plans to build up to a thousand new pebble-bed nuclear reactors.

If you want the simple life–go set up a commune somewhere and become self-sufficient. Just don’t demand that the rest of humanity join you. We’ve all benefitted from trade, oil, and development. Now we are moving to the next phase and we have to go through a transition. That’s it. The world will not end. And if real deprivation does set in, even the greenest among us will come begging at the door of industry.

Our most present danger is fundamentalism and narrow-mindedness in all its forms, which would like to set the world back centuries. In the end, it doesn’t matter if that mindset comes from ignorant terrorists, or pseudo-sophisticated ascetics such as Kunstler. Both are dead wrong. Cities may be devastated by the former. The dire forecasts of the latter may have elements of truth. But necessity is the mother of invention. Change and crisis also give rise to new opportunities. Reason, ingenuity, and a desire to “not go gently into the good night” will ensure the continuation of the unstoppable trends of human progress and globalization.

Note: On the one hand, Kunstler is still wildly wrong that the world’s economies will collapse from lack of oil. We have the opposite problem now, of too much oil still being produced, harming the climate and producing a kind of “Environmentalist Apocalypse” from global warming. On the other hand, I was terribly naive about how long it would take for the renewable energy buildout, as well as the response of American drivers to $5.00/gal gasoline. And the idea that progress and globalization are “unstoppable” has also been severely challenged in the Trump era. Sad it’s come to this. –Sean Prophet, August 2022

On life and love