Vapor Trails: New Rush after 6 Year Hiatus
LOGIN
Sunday, November 27, 2022
Top Posts
What’s Up With the Nazi “Black Sun” Rune Wheel?
The Eightfold Path of Denial of Death
Elizabeth Clare Prophet Claimed To Be ‘Clairvoyant’
Why I Left The Radical Secular Podcast
Miss R*EVOLutionaries: Panel Discussion
Money Is Not A “Shared Fiction”
Beliefs About God Won’t Make You Moral
This Is Not Fine!
Wealth Concentration Leads to Feudalism
Is Something Unclear About What’s Wrong With America?
SUBSCRIBE
Archive 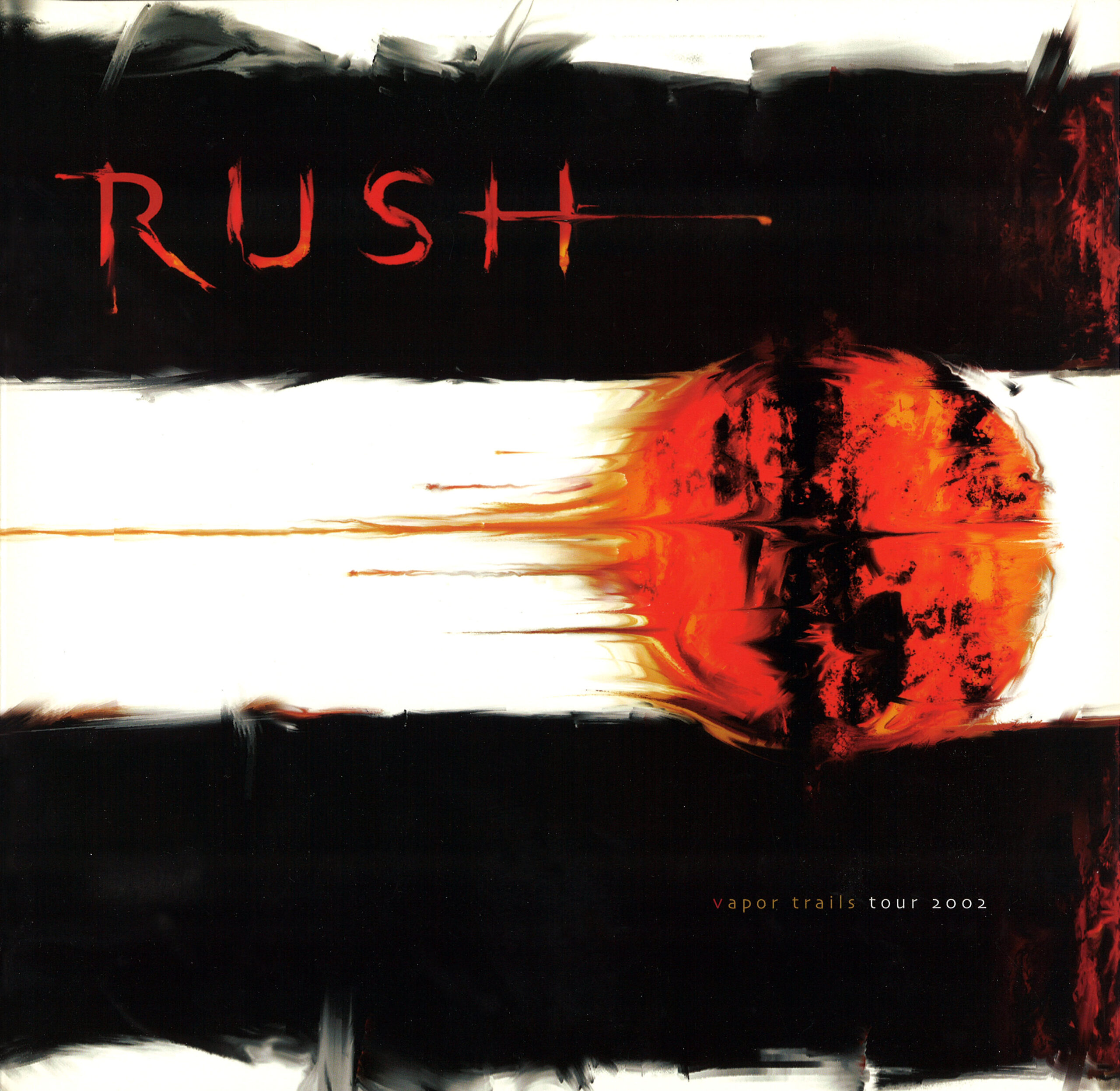 Vapor Trails was one of the most anticipated Rush releases ever. It is the Canadian trio’s first album since “Test for Echo” (1996). Rush has been in limbo since shortly after the close of the “Test for Echo” tour. For many years rumors of the demise of Rush circulated–always proving to be unfounded. But the rumors always seemed to center around drummer and lyricist Neil Peart. First it was thought that he might have brain cancer. Then some people thought Rush would never be the same when Peart retooled his heavy metal drumming style with jazz-method drum teacher Freddie Gruber prior to “Test for Echo.” This time, though, the all-too-sad-and-real news involved twin tragedies: Peart’s 19-year-old daughter Selena Taylor died in a single-car accident in August of 1997. Less than a year later in July 1998 Peart’s wife Jackie died of cancer.

It took much of the intervening time for Peart to “get better,” in the words of Alex Lifeson, the band’s guitarist, quoted in the Calgary Sun. Peart got married again in 2000, and by early 2001, he, Lifeson, and vocalist/bassist Geddy Lee were back in the studio.

Rush is a band with a nearly 30 year career, having received accolades such as a star on the Canadian walk of fame, being inducted into the Order of Canada and–according to the band’s official website–are honorary members of the Dutch Royal Family. And both Lee and Lifeson had released their own side projects since “Test for Echo.” Having sold more than 35 million albums in their career, expectations were high for “Vapor Trails.” The reconstituted Rush spent more than a year on the recording–according to Neil Peart’s album bio–it took that long mainly to write and sift through the material, and to be happy enough with it to “abandon” it (since art is never truly finished).

So…drum roll please, Neil…the album is a big success! Charting on the Billboard top 200 at number 6, it is also number 2 on the Internet album chart, just behind the ultra-commercial-maketing-machine that is Moby. I heard the single “One Little Victory” when I was driving a U-Haul truck (about the only time I’d be caught dead listening to the radio). Commercial radio for me is just one step above noise. If I can’t choose the music–I’d rather have silence. But on this day, before I even heard Geddy Lee’s vocals kick in, I knew I was hearing new Rush. What a feeling. The last time that happened was in 1985 when I heard “Manhattan Project” on the radio just prior to the release of “Power Windows.”

May 14, the day of the album release, there was a brush fire in the Sepulveda pass. So my normal hour commute up the 405 looked to be turning into 3. So I figured I’d hit the coast route and stopped in Santa Monica to pick up “Vapor Trails.” (I grabbed the Moby album “18” as well. It’s pretty good, in its own way. I’d give it a 7.) Well, a few other people had the idea of taking the coast highway also and I got through about 5 or 6 songs before I even left Santa Monica. I don’t know if it was the traffic or what, but I was really disappointed in the album on first listening. It sounded thick and one-dimensional–and the songs seemed ordinary. Other than the radio hit “One Little Victory”, nothing stood out to me.

Fitting a new work of art into one’s expectations is always like breaking in a new pair of boots–be prepared for some pain and blistering before it’s over. Especially if the artist is a favorite–as Rush is with me, and has had profound influence on my life. I always preferred the big production numbers to the stripped down feel. “Vapor Trails” is VERY stripped down. Like “Test for Echo,” there are no keyboards or orchestration on this album.

I think I was expecting more of a return to Rush’s earlier glory–not necessarily their radio hits, but songs like “Mission,” “Chain Lightning,” “Vital Signs,” “Force Ten,” “The Camera Eye,” etc. But it seems they made a conscious choice to use simpler song structures, almost no soloing, and a very in-your-face guitar sound. And who am I to argue with 35 million albums? I was ready to write this off as the inevitable Rush concession to putting out a commercially successful record. But I decided to give the album 10 spins or so before passing judgement.

Now the good news: It worked! Upon repeated listening, the textures come alive. What may have seemed like overly simple drum parts showed their genius and elegance. What Freddie Gruber did for Peart is to teach him how to play REALLY hard stuff and make it sound easy. No more huge kits or flashy tom fills–just solid drumming and that signature Peart committment to self-improvement and evolution.

Geddy has been busy as well. His voice continues to improve, and he can still hit the high notes. But he takes on some new adventures this time: The man with the trademark screech-heard-round-the-world that debuted in 1974 has finally given in to falsetto! His vocal harmonies (falsetto and not) are far denser and more complex than ever before. His vocal pads also take the role in many places of providing the texture of the missing keyboards. In the bass department, Ged is as solid as ever, and on this album uses a lot of bass chords. The tonality of his bass ranges from the Rickenbacker growl to the rounder sustained high notes that (sort of) help justify not using keyboards.

Lifeson at times plays louder and heavier than in the past, but still manages to keep his lightness, softness, and sensitivity when needed. I was gratified to hear some chords that I hadn’t heard since the Signals/Grace Under Pressure/Power Windows period. But much about the heavy guitars on Vapor Trails can be compared to a modern Metal, Grunge and Alternative sound.

Now on to content: After spending some time with the liner notes, it’s clear that Neil Peart will retain his title as the king of alliteration and poetry in rock. Normally circumspect about his literary influences, on Vapor Trails, Peart gives credit to his inspiration for nearly every song. (You’ll find this info on the album bio.)

The title cut, “Vapor Trail,” is about the darkest song I’ve heard since “Between the Wheels.” I expected to hear the dark influence of Peart’s personal tragic experience on this album. But the desperation in “Vapor Trail” seems to be for the Earth, which is depicted in flames on the cover. There is a parallel theme in the song, and that is the other meaning of “Vapor Trail”–a contrail left by an airplane. (One television producer I know who’s not too fond of Rush wondered why they would name an album after a fart!) But maybe it’s also a metaphor like a Tibetan sand painting–everything that’s in the world will eventually meet it’s end and all that will be left will be a vapor trail–less than even a memory.

It’s always been hard for me to understand how when Rush writes songs about weighty subjects, they still modulate into major keys. That’s what bugged me about “Vapor Trail:” How can you sing lyrics like “Swept away like voices in a hurricane”–obviously the description of a destructive event–in a major key that makes it sound happy? Then I think back: even “Between the Wheels” shifts into a major key “The wheels of time just pass you by…” Must be a Lee/Lifeson thing–when I sell 35 million albums, I’ll tell them how to write their songs.

Thematically, the album used tarot cards to symbolize the archetypes discussed. In “Peaceable Kingdom” a song related to the events of 9.11.01 and the fundamentalism that spawned them–Peart makes great use of these archetypes. On the page with the lyrics for that song, the tarot card is “The Tower” (in flames). “All this time we’re burning like bonfires in the dark, while a billion other blazes are shooting off their sparks. Every spark a drifting ember of desire, to fall upon the earth and spark another fire.” My favorite track on the album.

“Earthshine” is a beautiful poem of devotion to whomever or whatever created this universe. It is a simple but powerful ode to the beauty and wonder of the play of light between our planet and its satellite. Peart has always been half-scientist, and his poetic half has brought many seemingly sterile physical phenomena into the realm of the mystical and magical.

“Out of the Cradle” is another standout track. A song about life: “Maybe time is a bird in flight, endlessly mocking. Here we come, out of the cradle, endlessly rocking…”

“Secret Touch” takes a bit of a zen approach, and is also I believe autobiographical. It describes the dilemma of one suffering from depression, and being numb–even to the rhythms of nature. He uses the line “there is never love without pain.” Something I’m sure he knows well. He closes that song with “life is the power that remains.” Bravo, Neil.