The Terror War Broke The Bipolar World
LOGIN
Monday, December 5, 2022
Top Posts
What’s Up With the Nazi “Black Sun” Rune Wheel?
Elizabeth Clare Prophet Claimed To Be ‘Clairvoyant’
The Eightfold Path of Denial of Death
Why I Left The Radical Secular Podcast
Miss R*EVOLutionaries: Panel Discussion
Money Is Not A “Shared Fiction”
Beliefs About God Won’t Make You Moral
This Is Not Fine!
Wealth Concentration Leads to Feudalism
Is Something Unclear About What’s Wrong With America?
SUBSCRIBE
Archive 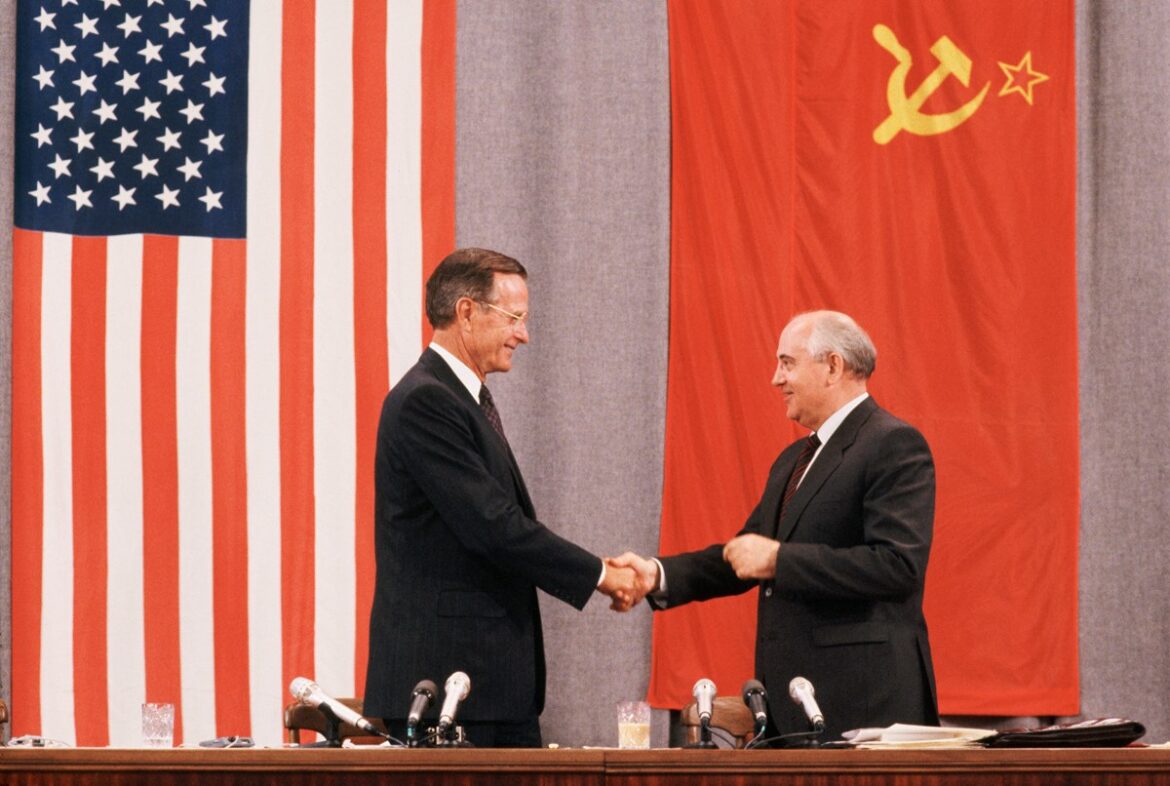 The terror war is far more dangerous than the Cold War ever was.Even at its pinnacle, with Reagan’s talk of the “evil empire,” the Cold War was governed by “deterrence.” Plenty of covert operations took place during the Cold War, with people killed and damage done. But both sides knew that they could not exceed a certain threshhold for fear of becoming involved in direct conflict. Fear of escalation to nuclear weapons made both countries assiduously avoid a shooting war through decades of saber rattling and third world proxy fighting. The combination of diplomacy and indirect confrontation allowed both superpowers to coexist and sometimes even forget they were enemies. This was a cyclic process that began with the Khrushchev “thaw”, the Nixon-Brezhnev “detente” which allowed such things as the Apollo-Soyuz linkup and limited cooperation in other areas. Then came Gorbachev’s “glasnost” and “perestroika,” which led to the breakup of the Soviet Union and the end of the Cold War.

What defined the Cold War was that both countries behaved because they both had too much to lose. They had to have some respect for the other, because their existence depended on it. Each could be utterly destroyed by the other at will. So disputes were resolved, the U.N. gave both a voice, and though they often did double duty as spies, at least there were diplomats.

This time, America doesn’t really know who it’s at war with. Those who oppose the war can’t even define who we should negotiate with to end it. Those responsible for fighting the war can’t even decide on their targets. Today Afghanistan, tomorrow Iraq? Wouldn’t it be nice to know who the enemy was? There is no clear objective, nothing that will signal that the war is over and Americans are safe. On the contrary, with civilians being directly targeted, retaliation for attacks and stray bombs today may not occur for many years. With a free society providing such a wealth of easy and soft targets, terrorists and revenge-seekers can bide their time and strike as it suits them.

I recall a particular bombing raid during the Gulf War. It was just after the development of the new 5,000 pound “bunker-buster” bombs. The U.S. attacked a bunker which contained many civilians, some of which were family relations of Iraq’s ruling elite. Following that raid, an almost tearful but still defiant Saddam came on television and vowed revenge. He said the U.S. would live to regret that raid, and that he would get his revenge even if it took him10 years. Well, that was 1991, and this is 2001. On September 11, those words echoed in my mind. Though the American government has not publicly blamed Hussein for the attacks, some hawks in the U.S. miltary reportedly want to go after him.

Clearly, there are many enemies, with many motives. They are united in their hatred of America, the last big kid on the block who everyone wants to knock down. And that’s without even considering the motives of religious fanaticism. Disturbing reports are surfacing about the enlistment of Muslim zealots from all over the world in the Taliban army. Islamic men of all ages have been coming from as far as Britain to join locals heading from Pakistan across the Afghan border by the thousands. As the government engages in a P.R. offensive to convince the world that it is not at war with Islam, events are proving otherwise. Journalist Andrew Sullivan writes in his October 7 article in the New York times: “In that sense, this surely is a religious war — but not of Islam versus Christianity and Judaism. Rather, it is a war of fundamentalism against faiths of all kinds that are at peace with freedom and modernity.”

Fundamentalists are the enemies of all mankind. In fact, Osama Bin Laden survived an assassination attempt from his right-wing who believed his religion wasn’t pure or strong enough. This insanity knows no bounds.

A recent satire in The Onion lamented “a shattered nation longs to care about stupid bullshit again.” Ain’t that the truth. But actually, America won’t have that problem anytime soon. Maybe that’s a good thing. Echoing the famous proverb: “All that is required for evil to triumph is that good men do nothing,” our national apathy and isolationism from the world has thankfully ended. We’ve been on a collision course with Islam for decades. Our survival was always endangered by these fanatics, the difference is now we realize it.

On a personal note, I’ve been troubled in the past few weeks by a bitter irony: I spent most of my twenties trying to resolve my own beliefs with the fanaticism of the religion my parents founded before I was born. In 1993, at 29, I left their organization. I was very relieved to be released from the hold it once held on my outlook and my life. Over the past several years, I’ve been truly grateful to be an American citizen, where I am allowed to make my own religious choices–including not to believe. After September 11, I feel an inescapable sense that I’ve lost some of that freedom. Somewhere out there, there’s a fanatic who’d like to kill me for the way I live. And now I realize he might be living in my city, waiting for a wake-up call from his Imam.

Like all Americans, I’m deeply disturbed. I was enjoying my freedom of conscience. Some of the Taliban rules, such as the repression of sexuality, the ban on music and dancing and all forms of alcohol, remind me eerily of my home-grown religious upbringing. An Afghan cab driver recently described how he kept a tape of religious chants in his car. He’d listen to popular music while driving, then when approaching a checkpoint, he’d quickly change the tape to the chanting. I used to do the very same thing as a boy–using headphones and secretly switching tapes–since I was prohibited by my religion from listening to popular music.

The initial horror of September 11, and the new realities of our vulnerability, have been replaced by something worse: Creeping dread of fanaticism. If anything good is to come of this religious war, it will be the stamping out of fanaticism through the steely resolve of civilized nations. The fervid ranting of zealots worldwide must be treated no differently than Hitler’s racial hate speech. Recently on CNN, Arnaud deBorchgrave described his eyewitness of the anti-American indoctrination of young Muslims as a routine occurence in mosques all over Saudi Arabia, a supposedly moderate Arab ally. This is nothing less than the brainwashing of a generation, and it’s got to stop. It’s difficult for me to see how these young Muslims will ever overcome their programming.

Civilization’s only chance at winning this war is to declare it for what it is, a war with Islamic fundamentalists, wherever they live. Fortunately, all Muslims are not fundamentalists. Recent massive demonstrations by young people demanding freedom in Iran are a bright spot in the troubles. Also, in the U.K., moderate Muslims beat a fanatic to within an inch of his life. Still, America is potentially at odds with hundreds of millions of people as well as its oil suppliers. As we attack the fundamentalists, some non-fundamentalists will be polarized against us. The diplomacy of managing these tensions will be a huge challenge. There are many traps that have been set. As usual, the U.S. has not taken full advantage of its potential allies, both within and outside of Afghanistan. The execution of expatriate Afghan rebel leader Zia Haq by the Taliban should have been averted. Whether we like the Northern Alliance or not, it’s hard to imagine a more valuable task than solidifying common cause with them. If there’s a coherent grand strategy at work here, I haven’t seen it yet. It’s time to define it. This will be a very long messy war and the outcome is not guaranteed. But there is no choice. The fanatics have heralded America’s destruction, and we’re not about to let them succeed.

As this was posted slightly over seven years ago a restatement or at least a hind-sight appropiate add on is long overdue. If only to mitigate it’s patriotism vs fundamentalist view point; especially in light of the recent Bush speech (Nov. 2nd) and his administrations zealousness in promoting the fundamentalist christian/catholic view concerning (among others) a vain attempt to curb sexually transmitted disease by directing (against scientifically researched evidence) funds that favour abstinence over direct protection during frowned upon act. Which add many tens of thousands to the already massive casuality list from AIDS. The number of children it leaves orphaned, not to mention the religious based view that it was god’s way of dealing with the sinful homosexual element which in turn adds to their scare factor in promoting abstinence.
Due to domestic terrorist and flawed security operations events in the decade leading up to 9/11 that warned of a global wave of fanaticism, this statement teetered precipitiously on the edge then.

In light of Bush’s now more verherment religious stance, the problem of domestic fanatisism, both islamic and christian, should be equally headered and addressed. Otherwise it seems we’re down to ‘my religion’s better than yours’, – because we get to argue about doing the wrong thing, based on the wrong thing, before we do it.