Film Review: Quills
LOGIN
Sunday, November 27, 2022
Top Posts
What’s Up With the Nazi “Black Sun” Rune Wheel?
The Eightfold Path of Denial of Death
Elizabeth Clare Prophet Claimed To Be ‘Clairvoyant’
Why I Left The Radical Secular Podcast
Miss R*EVOLutionaries: Panel Discussion
Money Is Not A “Shared Fiction”
Beliefs About God Won’t Make You Moral
This Is Not Fine!
Wealth Concentration Leads to Feudalism
Is Something Unclear About What’s Wrong With America?
SUBSCRIBE
Archive 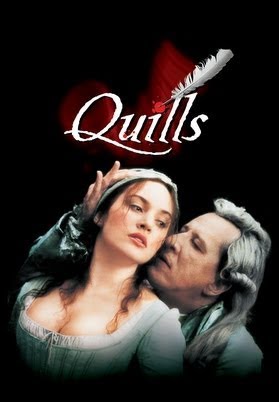 It is a cliche that every generation thinks it’s invented sex.Of course the same could be said for the other universal elements of human nature: hypocrisy, greed, lust for power. Either way, recent generations don’t have anything on the one that lived in France at the end of the 18th, beginning of the 19th century.

Quills is a film about sex, religion, self-expression, censorship, and hypocrisy. These universal themes could come from many chapters in history, from ancient Rome to the modern day. This particular story concerns the final period in the life of the Marquis de Sade.

Even the mention of the name Sade is enough to engender strong feelings. The originator of Sadism, Sade of course is the “S” in S & M. So a film on any aspect of his life is bound to be controversial. So much so, that Fox Searchlight actually caved in to pressure and took down a part of its website promoting the film. The site contained no graphic sexuality, just information about Sade, his life, and some quotes from his writings. There is a “virtue” side on the site, and a “vice” side. The “vice” side gives a cute little message that says “closed for now.” The irony is supreme. Quills is a movie about censorship 200 years ago, and the promotional material for the story being told 200 years later has itself been censored. Plus ca change, plus c’est la meme chose! (The more things change, the more they stay the same.)

The film opens with a sequence from the reign of terror. A woman is being guillotined, just one in a series of unfortunates. The crowd cheers as we see the growing pile of severed heads. The Marquis watches the scene from his window. It is unclear whether he is observing the scene, or whether it is a fantasy he is writing. We are led to believe the latter, because we are told that the woman has been a libertine in her life, taking pleasure at every turn. In true Sadean fashion, the executioner is now having his way with the woman, garnering supreme pleasure as she suffers in fear of his blade.

This is characteristic of the way in which Sadism is treated in the film. It is not heavy handed. Directed by Philip Kaufman, Quills only hints peripherally at the content of Sade’s writings. We see the above mentioned guillotine, there is a mild whipping scene, and Sade himself is subjected to a form of water torture. Oddly, all the tormentors were authority figures. So we see that Sade’s writings may have been spurred by the torture and violence he saw around him in the so-called “righteous” world.

But the meat of the film is Sade’s struggle to continue his self-expression while confined to an asylum. Played by Geoffrey Rush, Sade smuggles his writings out of the asylum with the cooperation of Madeleine, a laundry maid played by Kate Winslet. Madeleine is quite taken with Sade and his daring prose. She becomes a stalwart co-conspirator in his struggle and avid reader of his works.

When Sade’s novel Justine is published, all hell breaks loose. All copies are ordered burned and Napoleon orders Sade to be shot. An advisor to Napoleon convinces him to allow Sade to live, but to cure him. So Michael Caine is sent to the asylum as the evil doctor Royer-Collard. Upon his arrival, Sade immediately humiliates him with an ingenious and hastily conceived “play within a play.” As in Hamlet, this device brilliantly exposes the doctor, who becomes even more determined to silence his nemesis.

Meanwhile, Sade has developed a friendly if competitive relationship with the director of the asylum, Abbe Coulmier, played by Joaquin Phoenix. Some of the best dialog in the film is played between these two. The Abbe is a sincere but tortured man of the cloth, who struggles mightily with his own demons. He spars with Sade, but it is increasingly clear that the Abbe is less and less sure of his own position as the film progresses. Both are equally passionate, not only about their respective views, but also about their love for the beautiful Madeleine. Sade wants Madeleine and can’t have her, and the Abbe can have her but won’t let himself want her.

The film takes a number of surprising turns, as the Marquis becomes more and more desperate. We see the power and effect his words have on many. Mostly, he strikes a chord in people that causes them to express what was already within them. This does not set well with authorities bent on control. Suffice it to say that Sade remains undaunted and undeterred until the end.

What was missing from this film for me was a more thorough understanding of what Marquis de Sade was fighting for. After seeing the film twice in the theater, I was still unprepared for the impact of his writings. I went to the bookstore and purchased Philosophy in the Boudoir, and The Lusts of the Libertines. The former is in the form of dialogues between perhaps a half dozen characters, who engage in various bedsport, philosophical discussion, and ultimately torture. They reject all notions of self-control or moral judgements standing in the way of their pleasure. The latter is a listing of progressively more outrageous sexual and murderous fantasies culminating in nightmarish decimation untouched by any Hollywood horror film to date. After reading these two, I think I understand better now that Sade’s reputation as the original ‘sadist’ is well deserved. Appalling as some of his works might be to our modern sensibilities, he broke through the taboos that separated pain and eroticism. The two are, when used judiciously, a potent combination. While the scenes described in the Lusts of the Libertines will horrify the most jaded of readers, it’s pretty clear they were meant as the basis for fantasies. And who was ever harmed by a work of fiction?

Sade was nothing if not sure of himself. His arguments were clear, his voice strong. And this was a time when you could most definitely be killed for your views. He gave us a body of literature which, 200 years later, is still unequalled in its genre. It is amazing that he expressed himself so freely, from behind locked doors in an asylum and in fear of his life.

Excellent analysis, Excellent movie. For a cheezy live-action series horror version of de Sade, make sure to check out “Friday The 13th: The Series” which has an episode about him. But it can’t touch the movie, they are several orders of magnitude apart.