Star Trek: Enterprise – Series Premiere
LOGIN
Sunday, November 27, 2022
Top Posts
What’s Up With the Nazi “Black Sun” Rune Wheel?
The Eightfold Path of Denial of Death
Elizabeth Clare Prophet Claimed To Be ‘Clairvoyant’
Why I Left The Radical Secular Podcast
Miss R*EVOLutionaries: Panel Discussion
Money Is Not A “Shared Fiction”
Beliefs About God Won’t Make You Moral
This Is Not Fine!
Wealth Concentration Leads to Feudalism
Is Something Unclear About What’s Wrong With America?
SUBSCRIBE
Archive 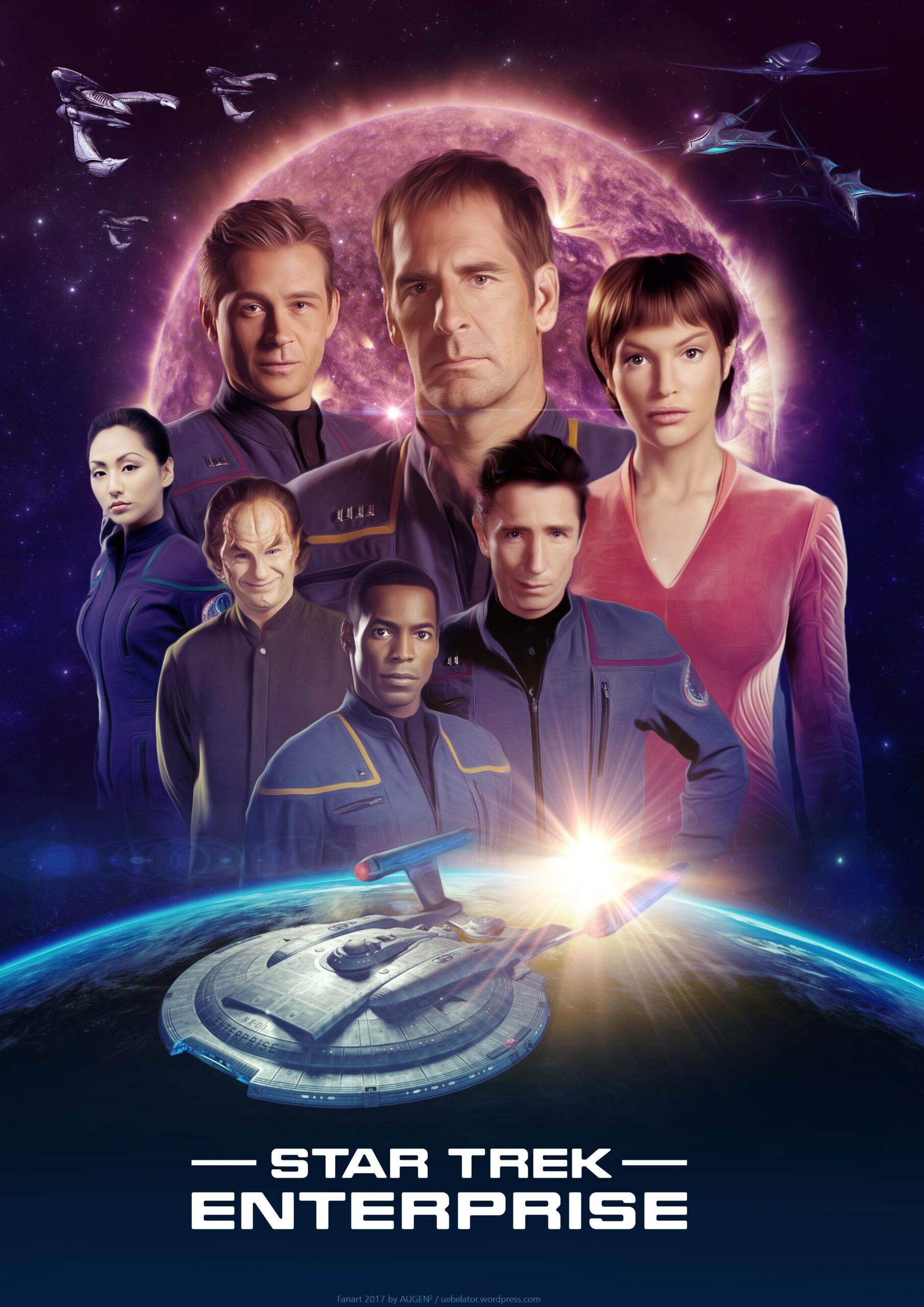 Tonight was one of the first tastes of normalcy I’ve had since the 11th. The only way to describe my reaction to the season premiere of UPN’s fifth Star Trek series is “a new hope.” I know that’s the original title of Star Wars Episode IV, but no matter. It’s how I felt tonight. From the opening moments of the show, I began to once again feel the reassurance of that continuity of our civilization. Even though Star Trek has always been a work of fiction, it’s had the distinct value of raising consciousness and shaping trends in the very real present. It’s no coincidence that today’s cell phones resemble the Star Trek communicators from the original series. The designers of those phones were kids back in the sixties when Roddenberry’s prop designers first put the idea in their heads.

Star Trek has always been more than a television show, and the latest installment proves this continuing commitment. Roddenberry succeeded in creating a vehicle for us to try on different futures before we actually go there. He explored value systems and ethical dilemmas presented by situations no one had even dreamed of. Producer Rick Berman has faithfully carried the Roddenberry torch. Set in the year 2151, Enterprise is 100 years after the time of First Contact with the Vulcans. It’s still about 100 years before the time of Captain Kirk, and we get to see the infancy of many of the elements of that original show, including the transporters. But the important point here is that 2151 brings us a world at peace and highly developed. The new Captain Jonathan Archer, played by Scott Bakula, defends humanity to the Vulcans “We’ve come a long way in the last two generations. War, disease, poverty, they’re all gone.”

The opening scenes of Enterprise are not like any of the other series. Gone are the slick computer animations of stars and planets with their icy cool electronic score mixed with majestic orchestra. Instead, it’s a simpler opening, going back to roots in the present and past. We are treated to a kind of capsule history of exploration and discovery, with various ships throughout the past bearing the name Enterprise. We go from a primitive sailing ship, through the aircraft carrier Enterprise, then the Space Shuttle Enterprise, the international Space Station, and finally we see the new star ship, the first to bear engines capable of Warp 4.5. The theme music is a warm rock and roll anthem, with a very human feel. The message is: exploration and discovery are about our humanity, and let’s not forget that.

Let’s also not forget that a century earlier (50 years in our future), a sparsely populated Earth was pulling itself from the ashes of a nuclear war. Out of those ashes rose scientist Zephraim Cochrane, with his test of the first warp drive engine, launched on a Minuteman missile. It was that test flight that attracted the attention of the Vulcans. In this lastest installment of the Star Trek saga, we are told that the Vulcans proceeded to keep Earth in a kind of diplomatic quarantine for a century, preventing us from contacting other species. They even prevented Archer’s father from testing his warp engine designs. Archer finally stands up to the Vulcans, and goes on a mission to Kronos, the Klingon home world, to return an injured warrior bearing a genetically coded message. My only complaint: like all Star Trek episodes, this one unfolded on a predictable time table, and impossibly difficult situations were miraculously solved in the last 10 or 15 minutes of the show.

There were many great moments in this premiere. Even though it is set in the earliest time period, it’s clear that this show contains the most advanced production values yet. The lighting and visual effects are the most dramatic and realistic of the five series, and it is presented in 16:9 aspect ratio, a clear indication that it was designed for high definition viewing. It’s hard to imagine that Captain Kirk’s primitive looking ship was more advanced. But that’s OK, I can suspend my disbelief for these excellent production values.

Enterprise keeps the human touches not usually present in the other 4 series. The characters wear jumpsuits, they express emotions, food is served normally instead of from replicators, Archer has a dog, and men and women actually acknowlege sexual tension. There’s a scene where a partially clothed T’pol (a Vulcan woman) and Lt. Malcolm Reed rub an antibiotic gel all over each other’s bodies. Though verbally sparring throughout, they are both clearly aroused, and T’pol’s nipples are erect as she walks away from the encounter. Further to this, there’s a scene in a bar on the planet Rigel 10 that has two exotic dancers in really fancy latex body suits, a la the “X-men” movie. They’re doing an erotic number, while lapping up multicolored flying insects with 10-inch tongues. This striptease almost succeeds in distracting the crew from their mission as the local pimp offers to provide girls to the crew. Bravo Rick Berman! We see that people in the future actually possess hormones! From the other 4 series, you could have been forgiven for thinking that sexual adventurism had been left behind in the 20th and 21st centuries. After all, it’s not realistic that technology is the only thing that progresses in the next 150 years!

Whatever the future will bring, with all its gadgetry and hope for human development, we’ve got to get through the mess we’re in today. That’s why this show gave me a new hope. Whatever our rivalries and divisions, and whatever the outcome of events stemming from September 11, our future is firmly rooted in principles. Our destiny is to unite as one people, and move out to the stars. If the Star Trek scenario ends up even close to true, and even if it takes a nuclear war to get there, we can take comfort in the vision that civilization will triumph.

So it was great to witness that vision. Because it helps us realize what is important to accomplish today to bring it to pass. Today, cell phones, tomorrow, real human progress. Today’s kids will carry this vision into their lives, and they will help make it a reality.

Finally, my favorite moment in the first episode: A Federation Council watching a videotape of Zephraim Cochrane’s speech many years earlier dedicating his new warp engine: “…to explore strange new worlds…to seek out new life and new civilizations…to go boldly where no man has gone before.” Now we know the origin of the Star Trek credo.