Cosmic Serpent: DNA and the Origins of Knowledge
LOGIN
Monday, December 5, 2022
Top Posts
What’s Up With the Nazi “Black Sun” Rune Wheel?
Elizabeth Clare Prophet Claimed To Be ‘Clairvoyant’
The Eightfold Path of Denial of Death
Why I Left The Radical Secular Podcast
Miss R*EVOLutionaries: Panel Discussion
Money Is Not A “Shared Fiction”
Beliefs About God Won’t Make You Moral
This Is Not Fine!
Wealth Concentration Leads to Feudalism
Is Something Unclear About What’s Wrong With America?
SUBSCRIBE
Archive

Home Books Cosmic Serpent: DNA and the Origins of Knowledge

Cosmic Serpent: DNA and the Origins of Knowledge 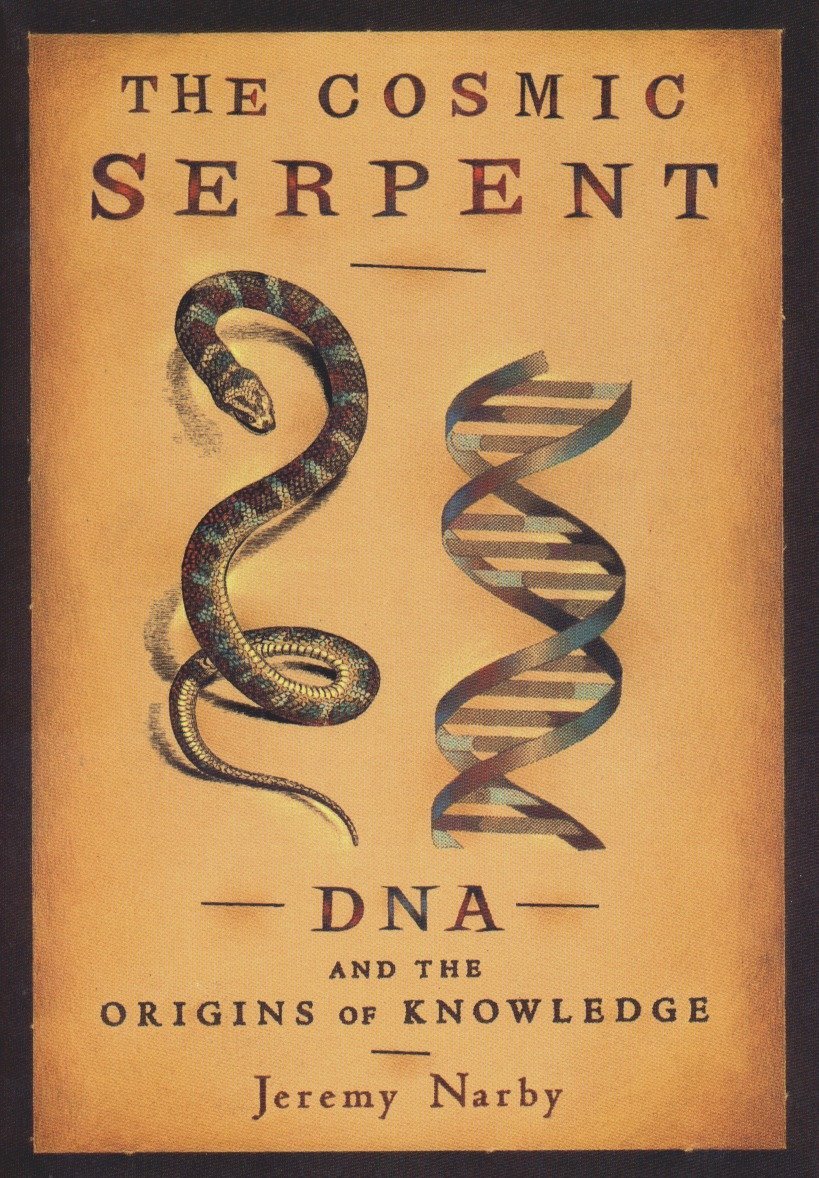 I wanted an introduction to the rituals of Ayahuasca, a hallucinogenic South American plant concoction, something I’d heard about from a friend and thought I might like to experience at some point in my life. What I found was an amazing discourse on the subject of the anthropology of Brazilian Ashaninca tribe, their Shamanism, and their own plant induced hallucinations. These Shamans had tobacco and ayahuasca-induced visions, that throughout history had taught them greatly about their environment. Yes, you read correctly. Tobacco, and Ayahuasca. The tobacco they reduced to a thick paste was at least 18 times more concentrated with nicotine than the varieties popular in the northern hemisphere. At these concentrations, even nicotine induces complex hallucinations that prompt shamanistic trances. (They learned vital facts about their environment through these trances. For example, which of the 40-odd types of curare to use to make poison arrows that would allow them to shoot animals in trees without paralyzing the animal so that it would fail to fall as desired.)

But it is the Ayahuasca that truly catapults shamans into what they have called “Forest Television” where giant snakes are seen, and they are taken to places “far from earth” and given “cosmic history lessons” by these supposedly intelligent beings. The author of the book actually goes and experiences several ayahuasca “journeys”. But the true genius in the book is not those descriptions. It is his careful analysis of the visions which lead him to speculate that the serpents being seen are actually hugely magnified versions of DNA. Furthermore, he explains, it’s not just the Ashaninca tribe who revere DNA, but most of the other world cultures. Then he shows the cultural proof to back it up–tons of references to DNA-like snakes in art and literature–including in the Garden of Eden myth (one of the few examples of a negative snake-myth).

He postulates that a reason for this is that DNA is actually communicating at some level that is excited or enhanced by the hallucinogen in ayahuasca: dimethyltryptine. The dimethyltryptine is only absorbed into the body in the presence of an enzyme called an MAO Inhibitor, (incidentally also the name of a progressive rock band), obtained from another plant. He then begins to expose a kind of DNA-centric view of the world, where form follows function. For example, the twisted branches of the Ayahuasca plant resemble the DNA molecule. An anthropologist by training, Narby also includes a great critique of the methods of anthropology and the overall scientific method. He argues for a more “defocused” approach, whereby solutions to problems can be acheived through deliberate defocus. For example, you might come up with the answer to a problem while thinking about something else in the shower. Your subconscious mind is working all-the-harder on the problem because you left it alone. Many vexing scientific dilemmas have been resolved this way by notables such as Newton, Einstein, Tesla, etc.

I loved this book for its thoroughness and honesty. I can’t say that I necessarily understand the mechanism through which DNA could be communicating on a conscious level. This seems highly speculative. But on the other hand, DNA communicates and replicates itself vast numbers of times each day. Without that, all life as we know it would cease. So could we someday discover that it possesses an innate intelligence? It seems more plausible that DNA is the blueprint for the computing engine of our neurology, rather than the engine itself. This author never shied away from the controversial fact that all his primary research was done under the influence of a powerful hallucinogen. Narby could do this because he also spent years living with and interviewing the Ashaninca, and the Ayahuasca experience was totally inseparable from their lives. And upon his return, he spent years more analyzing and organizing his data. A great read for anyone interested in general science, anthropology, hallucinogenics, indigenous cultures, or DNA.